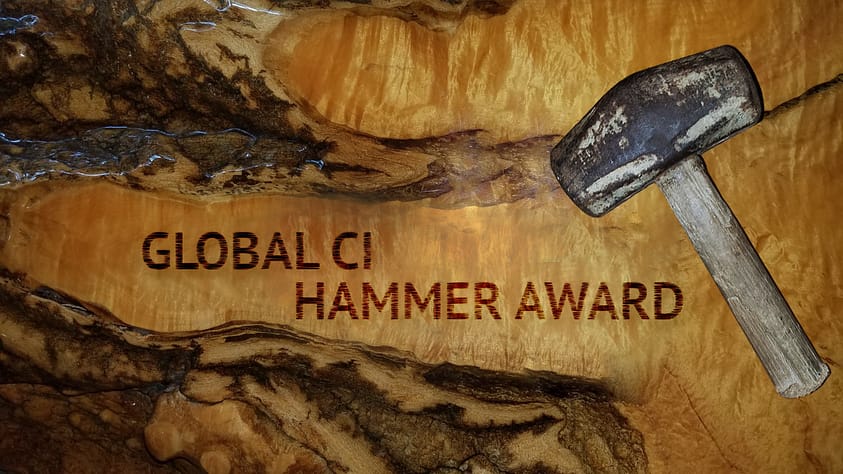 The Hammer Award originated in 1994 by Global CI for stalwart performance that completes a project with significant challenges and roadblocks. It is given out from time to time and often includes a bonus. There is a physical hammer that the recipient holds and displays until the next time the award is made.

This fall, Kimberly Mullins and Juanita Thomas have earned the hammer award for their leadership in the Human Resources Department. This fall amidst a global pandemic, they have onboarded employees from the acquisition of MMY Consulting, researched and migrated to a new payroll system, and and navigated vendor ownership changes. During all of this, they have both exhibited grace and dedication to their work, which has a resounding impact on the culture and well-being of the company as a whole. Global CI wants to recognize and honor their hard work this fall, and will be awarding them both a (pandemic-compliant) certificate of Hammer Award Achievement.

The History of the Hammer Award

The hammer award originates with Mike Ziman, founder and CEO, and his personal experience watching stone masons at work. In the spring of 1989, Mike’s morning commute offered him front row seats to the work of stone masons building a wall. Having applied once to be a stone mason’s apprentice, he was very interested in the craft. On the weekends and days they worked late, Mike brought them pitchers of ice water and stated stayed to watch them lay their stones. The foreman of the group explained to Mike the importance of the stone mason’s hammer, used to tap stones into exacting place. The craftsman said his hammer was decades old and served him well; hard when necessary, gentle as needed. Although the grueling, long work requiring dedication and an eye for detail, the statesman artisan said stone masonry proved fulfilling work: there was a certain satisfaction in knowing a wall his team builds would ​will last over 100 years and serve many generations. As Mike listened, he thought about how these virtues are consistent across many occupations fields . He felt the same dedication, commitment, gratitude, and satisfaction with his own work. The day came for the stone masons to move on; their work was complete. However Mike noticed the foreman had left behind his hammer behind; a gift from the stone masons and an embodiment of the values he taught along the way. A few years later, Mike would remember this momento and use it to recognize work of the same caliber and values at his company.

This site uses Akismet to reduce spam. Learn how your comment data is processed.

This website uses cookies to improve your experience while you navigate through the website. Out of these cookies, the cookies that are categorized as necessary are stored on your browser as they are essential for the working of basic functionalities of the website. We also use third-party cookies that help us analyze and understand how you use this website. These cookies will be stored in your browser only with your consent. You also have the option to opt-out of these cookies. But opting out of some of these cookies may have an effect on your browsing experience.
Necessary Always Enabled
Necessary cookies are absolutely essential for the website to function properly. This category only includes cookies that ensures basic functionalities and security features of the website. These cookies do not store any personal information.
Non-necessary
Any cookies that may not be particularly necessary for the website to function and is used specifically to collect user personal data via analytics, ads, other embedded contents are termed as non-necessary cookies. It is mandatory to procure user consent prior to running these cookies on your website.
SAVE & ACCEPT

Melanie McFaddin has over 30 years of aggregate business experience in corporate finance in several industries, including Oil & Gas, Petrochemicals, Independent Power Development, Software, and IT Services. Ms. McFaddin’s accomplishments include establishing and running a corporate treasury function for a $200MM publicly listed software and services company and founding and running three successful M&A firms. As a 25-year M&A specialist in human capital, she has successfully completed over 75 transactions representing over $850MM in aggregate value.

Ms. McFaddin holds an BBA in Finance, as well as an MBA in Finance from the Baeur College of Business at The University of Houston.

Cheryl Brown is an entrepreneur and business consultant who supports C-level executives by serving as a sounding board for strategic planning and provides guidance on how to grow/develop business and personnel. She has worked in the consumer, health, IT, and government verticals, including management capacities for Fortune 50 companies. Ms. Brown has started two small businesses and currently serves on two corporate and community boards.

Ms. Brown has an BS in Economics, as well as an MBA in Economics from the University of Pennsylvania Wharton School.

He has 15+ years’ experience in management consulting with a focus on growth, strategy, and operations. Managed large P&Ls with a proven record of leading and managing complex systems engineering and modernization efforts. Skilled in cultivating long term relationships and negotiating strategic alliances and partnerships with an acute focus on delivering shareholder value through growth.

Over the past 15 years, Josh Ziman has been a transformational force across various technology initiatives supporting the Federal Government. Today Josh serves as Global CI’s Chief Technology Officer, where he is leading the development and growth of Innovative Technology Solutions, Security Services capabilities, and Partner Integrations.

His vision encompasses a broad spectrum of automation, analytics, and security services that drives customers to the best solutions.  Prior to working with Global CI he spent several years as a federal employee at SSA and DHS as well as a Federal Services Manager at Cisco System.  Josh holds a Master’s Degree of Information Security from Capitol College.

Thanks for Signing Up!

Someone from our team will reach out shortly with more information on how to participate.

Thanks for reaching out!

Manoj Muzumdar, Distinguished Enterprise Architect, Global CI in 2003, Received his MEng from Massachusetts Institute of Technology (MIT), Cambridge, MA and his BS from MIT.  As an elite technologist and subject matter expert, he has garnered awards from the Commissioner of the Social Security Administration and contract Leadership for Health and Human Services.

Jessica graduated with a Bachelor of Science in Economics from the University of Maryland. She joined Global CI in 2020 with focus on communication, event coordination, and company culture development.

Sue has more than 25 years’ experience as a successful practitioner and consultant in the healthcare industry and combines specializing in driving organizational improvement while promoting sustainable and strong governance and infrastructures. As the National Practice Leader – Advisory Services, she is a passionate leader who works collaboratively with clients to maximize their long term performance and accomplish strategic goals. Sue’s specializes in: strategic planning and assessments, revenue and cost optimization, third party contracting and evaluations, business cycle effectiveness reviews, quality assurance and regulatory and governance support.

Senior IT Executive with more than 25 years’ experience facilitating and leading large groups in diverse organizations. Energetic, influential and adaptive relationship-based leader who takes a collaborative approach to align technology assets to support the business plan.

Sits on national Health IT Standards and Specification Committees and Health IT Policy Committee, Presented on request to the Whitehouse on Health IT strategy, vision and other matters three times, Presents at various Health IT related conferences, Consults to Federal Representatives from SSA, HHS, ONC, DoD, VA, IHS, CMS, and CDC.

Michael was promoted to the role of COO in September of 2013 and has been with Global Commerce & Information for over 8 years. Michael’s career has taken him halfway around the world with several Fortune 100 Companies. He has deep experience in enabling business transformation, establishing business process and is known for his passion for attracting and mobilizing top talent to deliver services on time.

Michael curiosity and fascination with what is important to people has shaped his determination to build high performance organizations that make a difference to peoples’ lives.

Bill has 25 years of experience as a successful technology professional and combines high-energy leadership with an entrepreneurial drive. As the President, he leads the creation of the vision for the future of the company.

Bill splits his time between three primary activities: working with the leadership team to develop the strategy and tactics to achieve the vision, spending time with clients to understand their needs, and listening to the Global CI staff to make sure he understands their challenges and how the management team can best support them.

Chris has more than 25 years of extensive experience in the implementation and life cycle management of technologies across entire organizations from an enterprise level down to a small business atmosphere.

A comprehensive background across several commercial and government industries has given Chris the opportunity to implement and test foundational technologies that have standardized IT management practices across the federal space and shaped national policy.